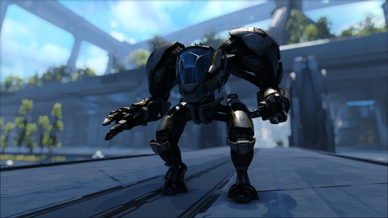 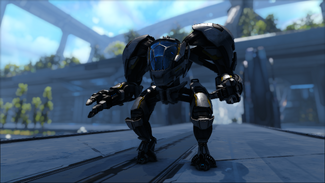 No
Data
Drag Weight
750
Immobilized By
Habitat
The Exo-Mek does not spawn on the Map. Instead, it must be crafted and deployed.

The Exo-Mek is one of the Vehicles, and a successor to the

The Tekgram for the Tek Exo-Mek will always unlock from the Rockwell Prime fight on any difficulty.

The Exo Mek is crafted at the following:

Exo-Meks are Federation variation for

Mek that can be piloted by Survivors, armed with giant Hands and constructed with a visible cockpit.

Exo-Mek will always spawn with its neutral color in its region, but can be colored.

The Exo-Mek always spawns with the same color scheme and has no color regions.

This means it is currently impossible to make alterations to the Exo-Mek's colors.

This section describes how to fight against the Exo-Mek

While Exo-Meks are only found as survivor's deployment and not in the wild, they do not pose any form of threat so long as they are not piloted.

Due to the Exo-Mek's high jump height, the player can trick the pilot into jumping far enough away to give the player time to hide. also, because they cannot attack when not in combat mode, you could potentially get a head start if you engage it while it is doing something else.

The Exo-Mek comes with four different modes of function (with the fifth one only exclusive to missions):

The Exo-Mek enters a barehanded battle stance. It is capable of doing straight punches, as well as a hammer-fisted ground pound. While boasting less attack power than its predecessor, it is still a reliable vehicle for close-quarters combat.

With this mode activated, the Exo-Mek extends its right hand outwards, which allows it to absorb tribe-owned / player-owned Structures, storing it into its virtual storage module. Excellent for transferring base components during a move to a different location.

The Exo-Mek squats in a carry position, capable of lifting various Structures and placing them down elsewhere (akin to the initial construction of a Structure). It should be worth noting, however, that items which need to be placed on Foundations still abide by that rule, even when carried by the Mek. Perfect mode for moving storage units (such as Vaults or Fridges) someplace more spacious and accessible, as whatever storage Structure it picks up will not destroy or drop any of the items kept within. It is also unable to pick up Foundations.

A unique feature this vehicle boasts, the Exo-Mek can activate a bird’s-eye-view of the surrounding area, highlight nearby tames and issue orders for them to move to a location or attack a specific unit. A vital function for when traditional whistling proves time-consuming, counterintuitive or inconvenient. This can especially work well during

Besides all of the modes mentioned above, the Exo-Mek is capable of crafting Tek items within it, similar to a

Exit RTS mode with Middle Mouse Button. Binding over this key seems to disable it from ever working again until restoring default settings.

This mode is only exclusive to the Exo-Mek in this mission, with HLN-A temporarily attaching herself to the top outer hull of the Exo-Mek. It functions similar to Combat Mode albeit with its additional ability to fire Hyperbeam, but with a temporary energy bar and an infinite, indestructible health only omitting damage to its energy bar instead.

Egg Thief: The Exo-Mek is very useful for obtaining eggs be it from Gen 1 Volcano, to Rock Drake Eggs. It's ability to travel in hostile environments without drawing aggro from the natives is very useful, if your in AB bring along a light pet to protect against nameless. Also Note The Exo-Mek is protected against Gen 1 Volcanic Eruptions akin to a Magmasaur's saddle. Generally pilot the Mek to the desired Egg, use first person up close to tell if the egg is one you desire, hop out, grab the egg, and quickly board the Mek. By the time the parent dino has Aggroed, you are now long gone as you have access to super jump as well as being highly mobile, which is of great use to get out of the native dinos' aggression range.

Taming Aid: Getting to a location where a desired tame is quite useful with the Exo-Mek as no hostile dino in the game will aggro onto you. However please be aware not to get to close to a dino, for example a giga, if it is aggroed onto another dino, as even though the dino does not pay you any attention, it will still damage your exo-mek when it bites down on its target if you are too close. However if you approach a dino that is not aggroed onto anything you can simply build a trap around the dino or even set up a tame pen in close proximity to the preferred dino before hopping out of your suit to tranq it.

Ocean Explorer: Similar to the Enforcer the Exo-Mek can run at full sprint underwater. It can also pseudo swim by jumping. Along with the fact it does not aggro anything in the ocean at all, you can easily explore ocean biomes with ease, and even go out sea drop looting.

Radiation immunity: The Exo-Mek does not suffer damage in Ab or Val's Red zone allowing you to use it to explore radiated areas and potentially setting up bases in them without paying attention to the native dinos.