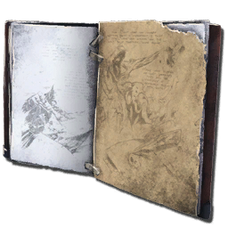 Broth of Enlightenment"). It is advisable to collect them while on a dino because your dino gets the XP and the effect as well. So the reward for finding these are doubled. If you find two Notes within a short time the effect time is added to the current one and not reset.

Collecting all Explorer Notes unlocks an additional 10 levels for your character.

All available explorer notes except 11 are listed below. The other 11 are the boss dossiers, obtained by defeating each of the bosses. There are currently three creatures with an unobtainable dossier, these being the Griffin from Ragnarok, the Deinonychus from Valguero, and the Tropeognathus from Crystal Isles.

For an interactive map of Explorer Notes and other collectibles, see the following pages:

Most Explorer Notes are on the same location as on PC, the ones that are not are listed here.

The One Who Waits