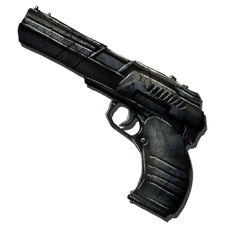 The Fabricated Pistol is a more advanced version of the

Simple Pistol. Even though the Fabricated Pistol has the second lowest damage per shot of any gun in the game, it makes up for this in various ways:

Fabricated pistol is a good weapon while taming or farming due to its weight of only 2.5 units, making it the the lightest weapon in the game. Also, its good fire rate and decent damage help in most situations.

Laser, the default key is N.