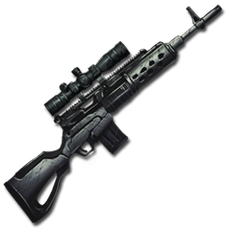 The Fabricated Sniper Rifle is a ranged weapon, a more advanced version of the

Advanced Sniper Bullet for ammo. While it doesn't do as much damage per shot as the Longneck (165 damage compared to the Longneck's 280) it can be fired 8 times before needing to be reloaded. The fabricated sniper rifle also dosen't need a scope attachment since it comes as part of the gun.

The weapon has an excellent burst DPS, just some points shy of the destructive

Pump-Action Shotgun. Also, considering how ammunition makes for most of the cost while using a weapon, it is indeed cheaper to use than the

Assault Rifle, while retaining a high yet manageable recoil because of the lower firerate. Finally, unlike shotguns, it is effective at all ranges possible. To compensate, this weapon has a very long reload time for its small 8 round magazine and a fast durability drain, making sustained fire an unwise option. Moreover, it expels an absolute number of projectiles (remember that shotguns fire multiple pellets) at a much slower pace than any other fabricated weapon, reducing the chances to hit a moving target when used by less skilled survivors.

It is also the most expensive to craft and therefore requires much more materials to produce in mass and obtain high crafting bonuses.