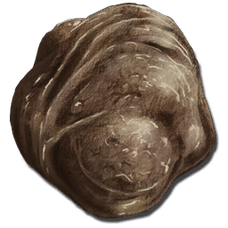 Feces are produced by all terrestrial , aerial creatures, and humans in intervals, depending on the amount they eat.

Feces can be used to produce

To create one bag of Fertilizer, 3 ×

Feces must be placed in a

Compost Bin along with 50 ×

Thatch. After around 50 minutes these ingredients are turned to Fertilizer. They can also be converted more efficiently by a

Dung Beetle, which converts Feces into Fertilizer in 15 minutes (along with

Oil) and produces up to nine times as much.

Feces can be eaten as it is technically classified as food. When ingested, Feces will do damage to the

All non-aquatic creatures produce feces. Feeding a Phiomia or Roll Rat stimberries can create a lot of feces in short time.