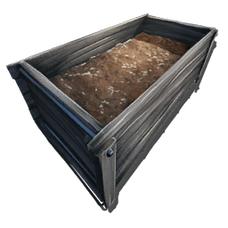 The Feeding Trough in ARK: Survival Evolved simplifies the feeding of nearby tames, allowing them to eat from a shared trough instead of having food in their own inventories, and thereby potentially reducing spoilage from multiple stacks.

The Feeding Trough does not require a foundation for placement, and as such does not interfere with the spawning of natural resources. It does not snap to other structures. Feeding troughs may also be placed and used underwater for taking care of marine creatures. The trough works through walls and from higher elevations, so there is no need to put them in water if you have a base above or adjacent to your water pen, nor is it necessary for animals in individual pens to have individual troughs.

The feeding trough holds anything that can be used as feed for any type of tame. This includes such strange items as stone or sulfur for Rock Elementals. Tames within its range eat from the trough before consuming food in their inventory. Any and all foods can be placed in the trough at once, so

Meat, and so on can all be mixed together to feed all types of tames.

Tames belonging to allied tribes can also feed from a trough.

Food placed in the trough has its spoil time multiplied by 4, just as it would when carried by a dino. It is therefore advisable to keep food in a nearby

Refrigerator and only top up trough supplies periodically. For more information on spoil times, see Spoilage.

The Feeding Trough allows tames to feed within a cubic range of 11 foundations horizontally maximum (depending on the orientation of the map) and 15 walls vertically from the point of placement. The tames do not have to move as long as they are within this cube. Tames that wander through the range area are also able to feed from it. You can confirm which tames are within range by observing the feeding trough icon above each tame's name. Tames display the icon regardless of whether the trough(s) they are in range of actually have suitable food for them. Since patch 311.74 or earlier, the Feeding Trough has an option to show the range with a green circle.

The Feeding Trough is not currently paint-able, however this object may be re-mapped to include paint regions in a future update.