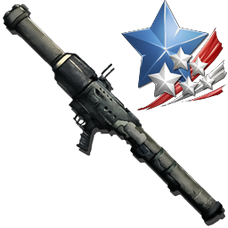 This skin is dropped by

Alpha Mosasaurs. It can also be obtained by getting the achievement Giga Rider.

The Fireworks Rocket Launcher Skin can be applied to any

Rocket Launcher. When firing Rocket Propelled Grenades from a skinned Launcher, they leave a trail of sparkles behind. When the Rockets explode, a firework effect is created. It also does more damage than a normal launcher.

This skin can be unlocked by completing the Giga Rider Achievement, after which it will be available in your inventory whenever you respawn.

It was also craftable in the cooking pot with 50 Cooked Meat, Cooked Fish Meat, or Cooked Meat Jerky during every Summer Bash Event.