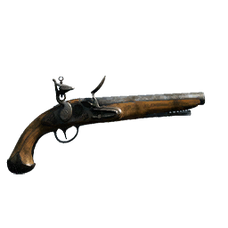 The Flintlock Pistol is a Weapon in the Primitive+-DLC of ARK: Survival Evolved. It deals 160 damage to players, but 112 damage to dinosaurs since they only take 70% of the damage from guns.

The flintlock pistol is suitable for any kind of opponent, but it has only 1 shot, making it less effective against tough or fast opponents with more than 200 health such as an