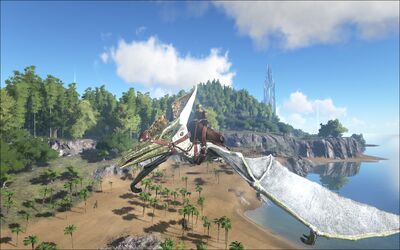 A player riding a saddled Pteranodon

Flying is an important part of ARK: Survival Evolved. Players can mount tamed creatures and fly, which allows them to travel quickly and access areas that are not available to land-bound players and creatures. There are also other flying creatures that are untamable, or tamable but unable to be mounted.

Flying consumes a creature's stamina, so players must land occasionally for a creature to regain its stamina.

There are 26 Flying, 25 of them released and 1 yet to be released (including variants).