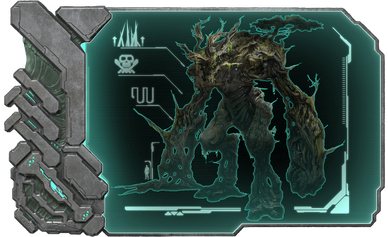 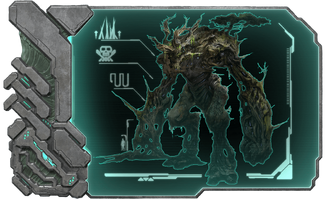 The Forest Titan is one of the Creatures and one of four Titans in the Extinction DLC of ARK: Survival Evolved, found in the Forest Cave in the north of the map. The boss is a temporary tameable creature.

So succumbs the Lord of the Forest, the titan wreathed in green, who lashed out with root and vine to pin its foes to the ground or drag them to their doom. The forest itself rose to shield it, but even that could not save it. Not from you.

The Forest Titan, while being slow, is an aggressive Titan that'll swipe its opponent with incredible range. When it's killed, or it dies, it turns into a brownish colored tree statue, being inactive for generations to come.

The Forest Titan measures in at roughly 276 feet (84.2 meters) tall. To get a grasp on the scale of the forest titan, the original Godzilla from the 1954 film is only 164 feet (or 50 meters) tall. Some of its parts glow from

The Forest Titan always spawns with the same color scheme and has no color regions.

This means it is currently impossible to make alterations to the Forest Titan's colors.

Meks can very easily dodge and fly around all his attacks while taking barely any hits. even a single Mek can defeat it with careful aiming and dodging, though this would be very costly in Element. (tested in single player)

A single max level and imprint Stegosaurus can shred the Forest Titan's health in seconds. (tested with and without single player settings; a stegosaurus with an imprinted base melee stat of 770 can deal 11k damage per tick)

The loot will sometimes appear in a dropped item cache, even if your tames don't destroy the body. You only have 3 minutes before this cache expires, so clear the area and find it quickly

A way to help taming become more trivial is by using several Purlovia, Basilisk, or Reaper King and have them burro in the arena. While burrowed they can not take damage from the Titan and will act as an infinite distraction to the Titan allowing for easy shots at the corrupt nodes to be taken from a distance with little risk. Placing several of any of the burrowed creatures will be most effective as it gives a greater chance the Titan will aggro onto them and nothing else in the area.