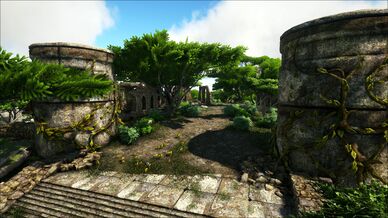 The Forgotten City is a region in the Valguero DLC.

The City has 2 entry points in the form of stairs. The people who have once inhabited it have seem to have disappeared some time ago. It is found in The White Cliffs. There are no threats, and can be explored almost as soon as you tame a flying mount, or a strong mount capable of clearing Deinonychus, as they spawn nearby the two entryways, but rarely do they enter the Forgotten City. It appears that the city’s was inhabited by a small population. It has a building that can be assumed to be a castle at the end of the path, as well as many smaller buildings alongside the path. Also has the green obelisk in the distance.

Nothing spawns within the city, but creatures from the surrounding area can walk up the stairs or fly into it.

The player cannot build on the site of the main keep as a supply drop lands right in the center. One can build around the edges of the keep but most of the walls and tower bases are bugged with "no snap points."