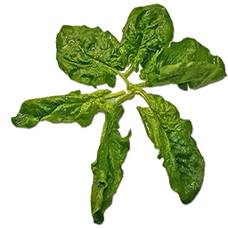 The Fresh Spinach is a Consumable in the Primitive+-DLC of ARK: Survival Evolved.

Spinach can be used to tame Dinos, just as Lettuce and Fresh Sorghum (Primitive Plus). Taming with Spinach is twice as fast as taming with normal crops (e.g. Rockarrot) by using the same amount. If you don't have the right kibble it's the best way to tame herbivores, although taming effectiveness can drop really low.

Spinach, Lettuce and Sorghum restore 20 food points during taming process. You need the same amount of spinach as you would need basic crops, but crops restore 40 points. That's why taming with spinach is twice as fast.