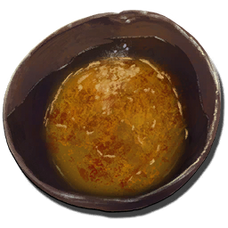 Fria Curry is a dish in ARK: Survival Evolved. It can be created in a

Consume it to gain +50 increased hypothermal insulation, and slow your rate of food consumption by 25%. The Effects last 15 minutes (900 seconds).

Each Curry takes 60 seconds to make in the Cooking Pot.

The Fria Curry can be extremely useful in situations where extreme cold may be the biggest threat to a player's survival, for example when exploring a cave or the Snow Biome. A Fria Curry is beyond valuable if attempting to complete the Snow Cave, or any cave that causes the player to freeze.