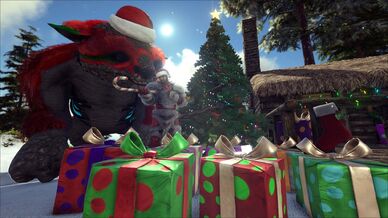 None
Drag Weight
350
Carryable By
Immobilized By
Can Damage

GachaClaus is one of the Event Creatures in ARK: Survival Evolved.

Coal in GachaClaus' Inventory. He will walk around, then sit and eat everything in his inventory, and single crystals will grow on his back until one drops. You will get varying quality levels of

Gacha Crystals which turn into Armor, Festive Dino Candy or weapons when consumed from your inventory (hitting the use key on the crystal). Only one mistletoe or coal is required to yield a crystal. GachaClaus will eat as many as 10 if placed in its inventory, yielding no better quality of loot. To determine if a GachaClaus will be lootable, check the crystals on its back. If there are crystals, you will get loot. If there are no crystals, he will consume the Mistletoe or Coal and not drop a crystal. The GachaClaus replenishes its crystals by smacking resources, so as long as it has access to resources, it will re-generate over time. Gacha Crystals will often times weigh less than the loot they contain.

If any wild creatures are nearby, it is best to kill them, as Gacha Claus hates being near them and will cause them to move more frequently. Predators may attack and kill Gacha Claus, so be prepared to defend him.

Merry Christmas and have fun!

This section displays the GachaClaus's natural colors and regions. For demonstration, the regions below are colored red over an albino GachaClaus. The colored squares shown underneath each region's description are the colors that the GachaClaus will randomly spawn with to provide an overall range of its natural color scheme. Hover your cursor over a color to display its name and ID.

GachaClaus has the same drops as the Gacha when killed, as well as the drops from the Gacha Crystals, albeit at a higher chance of ascended items. The difference between the Gacha Crystals from GachaClaus and any other Gacha is the chance to get Coal, Mistletoe, and other Winter Wonderland loot.

This section describes how to fight against GachaClaus.

Killing GachaClaus requires similar strategies to the ones employed on a regular Gacha.

The GachaClaus is easy to beat so long as you use ranged weapons. It's slow and doesn't deal much damage.

Most weapons will suffice against GachaClaus, but a

Longneck Rifle is generally useful to kill it with.

It can be very distracting of other things around you.

Due to its slow speed and low damage, ranged weapons will kill it easily.