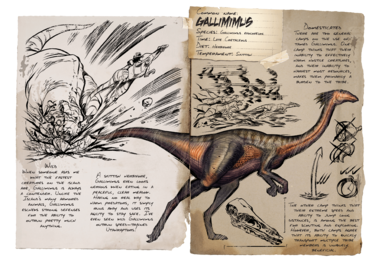 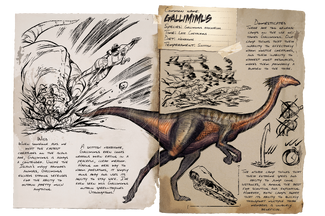 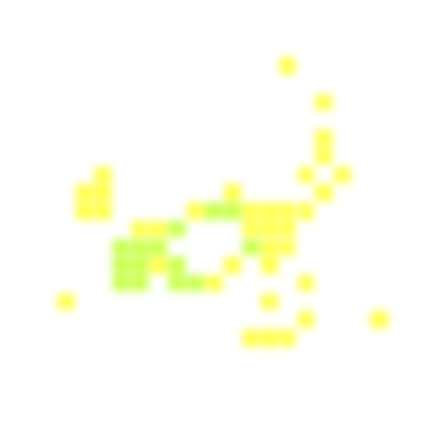 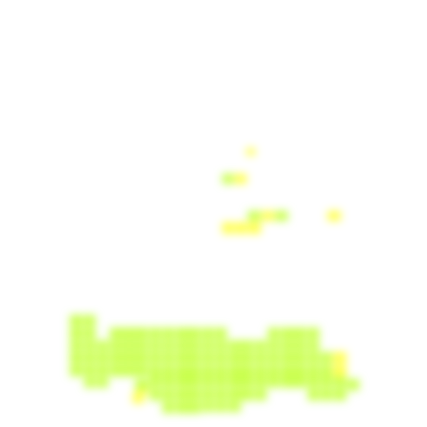 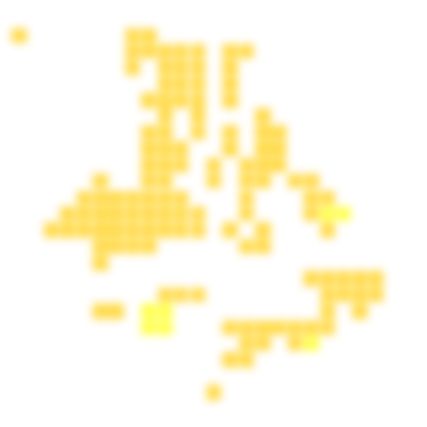 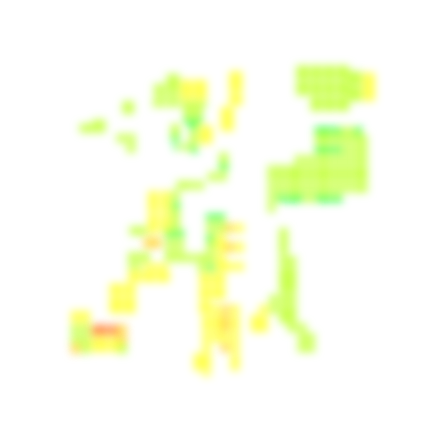 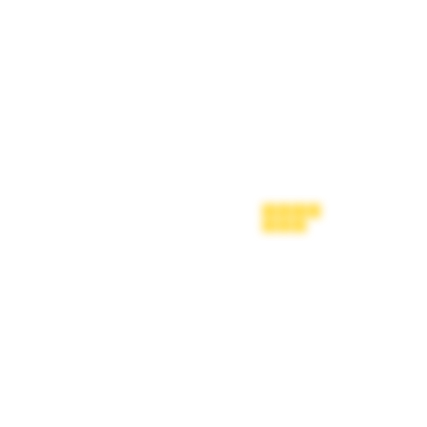 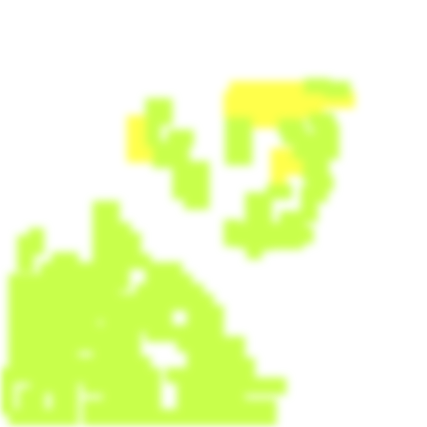 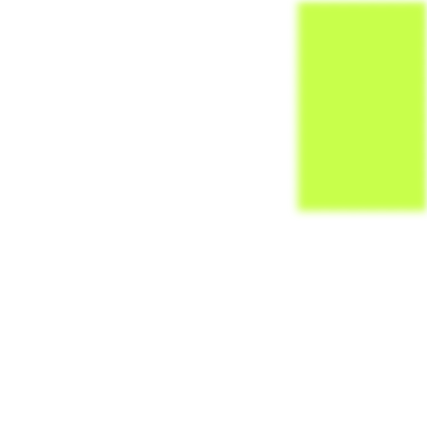 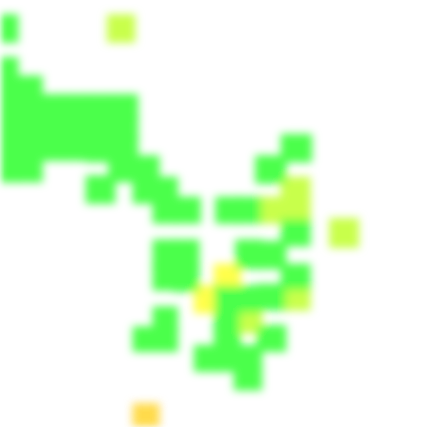 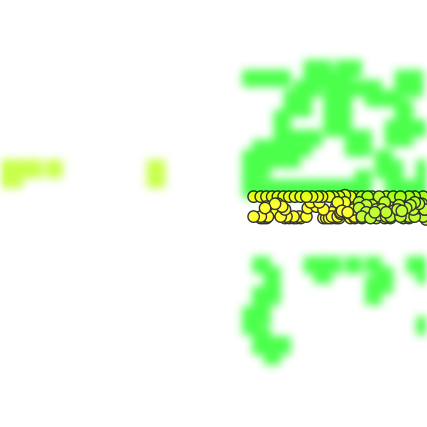 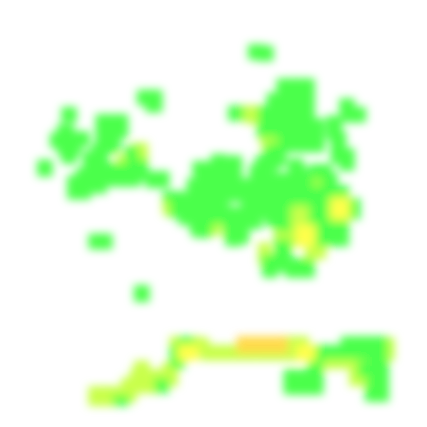 The Gallimimus (gal-uh-MY-mus) is one of the Dinosaurs in ARK: Survival Evolved.

When someone asks me what the fastest creatures on the island are, Gallimimus is always a contender. Unlike the Island's many armored animals, Gallimimus eschews strong defenses for the ability to outrun pretty much anything. A skittish herbivore, Gallimimus even looks nervous when eating in a peaceful, clear meadow. Having no real way to harm predators, it simply runs away and uses its agility to stay safe. I've even seen wild Gallimimus outrun speed-trained Utahraptors!

There are two general camps on the use of tamed Gallimimus. One camp thinks that their inability to effectively harm hostile creatures, and their inability to harvest most resources, makes them primarily a burden to the tribe. The other camp thinks that their extreme speed and ability to jump long distances, is among the best for scouting and exploring. However, both camps agree that its ability to quickly transport multiple tribe members is uniquely beneficial.

Gallimimus is a very skittish, shy species. Constantly on alert for carnivores, it never walks slowly, preferring to move around at a moderate trotting speed. When injured, it will run extremely fast away from its attacker, but is slowed down in water.

Gallimimus is a large herbivore resembling something akin to a reptilian ostrich. Like an ostrich, it has a long neck and a beak for eating foods like grasses and

Berries. It has a slim build with a long tail to act as counterbalance when sprinting from predators like

This section displays the Gallimimus's natural colors and regions. For demonstration, the regions below are colored red over an albino Gallimimus. The colored squares shown underneath each region's description are the colors that the Gallimimus will randomly spawn with to provide an overall range of its natural color scheme. Hover your cursor over a color to display its name and ID.

Gallimimus has low health compared to its torpor, a crossbow with tranq arrows can kill them, even if you give 5 seconds between shots.

When trying to tame a Gallimimus, be sure to utilize a

Bear Trap because of their high speeds. Once caught, the Gallimimus is quite easy to knock out because of its relatively low

Torpidity, be sure to use a

Longneck Rifle though because a

Crossbow will easily kill it due to its low base

Health. This strategy does require some luck and waiting, as the trap will take a while to arm itself. Alternatively, you can create a pen to chase the Gallimimus into and tame it in there.

Alternatively, you can use a tamed Araneo to shoot a web at the Gallimimus to slow it down significantly. Shooting the web at it will cause it to panic, but given the extremely slow speed it will be running at after getting webbed, and the fact that you can use weapons while riding the spider, you can have a pretty easy time shooting it with tranquilizer darts or arrows before it manages to free itself. Make sure your tames, including the spider, are set to Passive, as the spider's web attack still counts as an attack, and your tames might kill the Gallimimus.

Gallimimus will lose torpor very quickly after getting knocked down. It is best to come prepared by having Narcotics and Simple Kibble on hand once you knock down the dino.

The Gallimimus is, as of writing, immune to regular bolas. It will indeed get trapped by chain bolas shot from a ballista, but doing so is not recommended given the relatively high damage chain bolas manage to inflict, and the low base health of the dino. If it manages to survive the chain bola, it will likely not survive the darts or arrows you will have to dump into it to finish the job.

This section describes how to fight against the Gallimimus.

In general, the Gallimimus has a skittish behavior and tends to run away on the first shot. The Gallimimus, due to lacking of

Health becomes quite annoying to tame. The Gallimimus becomes an efficient Dinosaur after taming due to its high speed.

Aiming for the head will kill the Gallimimus almost always, no matter the level. When hit, it will run off at extreme speed. Try to trap the Gally in rocks or on a cliff if it doesn't go down first time.

Rifle works best but can still kill the dinosaur in one hit.

It's not dangerous, but if it doesn't go down on the first shot you're not likely to get another chance.

It has high movement speed but a lack of

Health, therefore it is easy to take down.

For information pertaining specifically to the real-world Gallimimus, see the relevant Wikipedia article.