The current Ark game mode can only be changed by the server admin. The commands to change the game mode on your server are available here.

Player vs. Environment (PvE) is a mode where players are unable to directly damage another player. Players also can't damage other tribe's dinos or structures. However, there is a PvE demolish timer that allows destruction of other tribe's structures if no member of the tribe has logged in for a specific amount of time.

On these servers, there is only one or two threats to survival. The first threat is the environment and if you so happen to be on an unofficial server then the second threat to survival could be Admin(s)

PvX is a game mode exclusive to ARK: Survival Evolved Mobile. In PvX, the aspects of PvP and PvE are combined into one map. 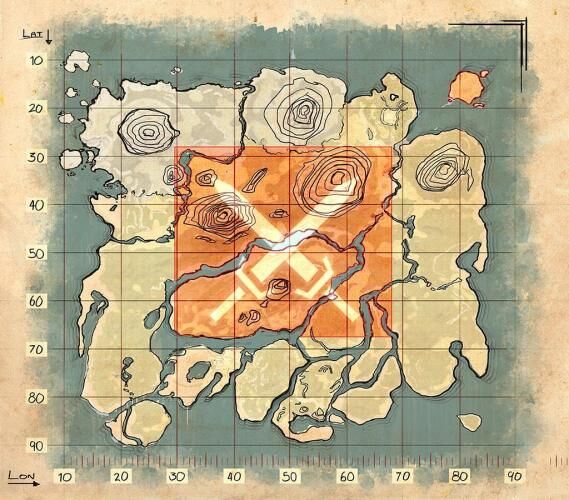 PvX Clock is a version of PvX with a smaller central PvP zone but a small segment of the PvP zone that reaches the shores of The Island rotates hourly. The same rules in PvX apply in PvX Clock.

King of the Hill (Mobile)[]

King of the Hill is a game mode exclusive to ARK: Survival Evolved Mobile. In King of the Hill, tribes compete to gain control of the Volcano. After a 2 week period, the tribe who has conquered the Volcano will be rewarded with a Tek blueprint, 100 ×

Eery Element, and a free server rental. Then all structures and tames will be wiped.

Ascendant PvP is a game mode exclusive to ARK: Survival Evolved Mobile. Survivors who are level 100 can purchase an

Ascendant Transfer Ticket from the In-Game Store, allowing them to transfer their data and premium items to an Ascendant PvP server. All survivors start from level 1 upon downloading their character.

All game modes can be played in Hardcore mode. When a player dies in the Hardcore, they lose almost all levels and respawn only with 9 levels go up.

Speciality servers are alternate game modes that last for a limited amount of time. Each new theme will bring on a new set of challenges different from that of servers currently available.[1]

Small Tribes servers are a type of specialty server that limit the tribe size to 6 players and alliances are not allowed. Server rates are 2.5x (harvest, taming, experience) and are not be affected by Evolution Events. They also have 2x maturation, 2x egg hatching, 2x gestation and 50% reduced mating interval.[2]

Conquest PvP servers are a type of specialty server that focus on big tribes and big battles. These servers have 2x rates (unaffected by Evolution Events) and have a player cap of 100. Tribes are limited to 25 players max, alliances are disabled, and 36 servers will exist within the Conquest cluster.[3][4]

Classic PvP is a new competitive player experience for PC players which focuses on the PvP experience from the days of old. These servers include:

With the beginning of Classic PvP Season 2 existing servers were wiped and the following changes were introduced:[6]

Both PvP and PvE game modes can be played in Primitive mode. When Primitive is enabled, the engram skill tree is missing everything from the advanced/modern tier except for saddles. High tier gear and structures are disabled. This includes fabricated items, all ranged weapons (excluding crossbows, Bows, and slingshots). By default, Primitive is disabled.

Survival of the Fittest[]

Single Player is a mode that allows survivors to play ARK offline as singleplayer. On the Xbox One and PS4 you can use the splitscreen function to play with a friend.