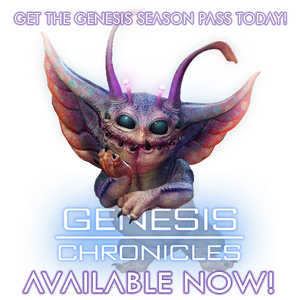 The Genesis 2 Chronicles are a series of routine content drops that add new explorer notes and skins related to the DLC Genesis: Part 2. It started on November 7th 2020.

The Genesis Chronicles adds in multiple Explorer Notes connected to Genesis: Part 2, some of which come from

Rockwell himself or Santiago. The player must have

the Mini-HLNA equipped (even on Genesis: Part 1) in order to unlock the notes.

Santiago's notes have to be picked up, and are not awarded just by getting into close proximity.

Collecting all Genesis 2 Chronicles Explorer Notes will also unlock the

These are summaries of the explorer notes of this chronicle series, references to lore in previous maps, and lore in Genesis: Part 2.
Genesis 2 Chronicles 1

HLN-A speaks in these notes.

These notes are only from Sir Edmund Rockwell.

These notes only include those from HLN-A and Santiago that generally talk about events before Camp Omega was raided by titans and corrupted creatures.

During these notes, the perspectives switch between HLN-A and Rockwell. Rockwell's voice gets further amplified with echoes.