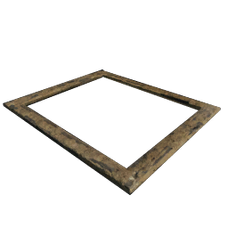 The Giant Adobe Hatchframe is a Structure in the Scorched Earth-DLC of ARK: Survival Evolved. It is designed to house the

Giant Adobe Trapdoor. Together, they provide protection against the outside world and keep dinosaurs contained inside of an area.

A Giant Trapdoor can be placed in the hole and locked to provide a way to restrict access to the area while still allowing you and your dinosaurs a way through.

The Hatchframe 2 walls long and 2 walls wide. It is intended to be used as a horizontal dino gateway mainly for flyers.

The following flyers can fit through the giant adobe hatchframe:

The following flyers cannot fit through the giant adobe hatchframe: