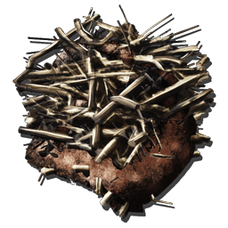 The Giant Beaver Dam is a structure created by wild

Castoroides. They can spawn on land or in the water and are approximately the size of a 1x1x1 structure. Wild Giant Beavers will become hostile if a player accesses one.

Giant Beaver Dams can contain large quantities of the following which makes them very rewarding when found.

Beavers can be found near bodies of water at specific locations on the map - a map of which is shown here.

Dams themselves can appear anywhere near the places wild

Castoroides spawn in. If a wild Beaver is relocated into a different zone, it will not spawn any dams.

On Ragnarok, there is an area known as the Beaver Sanctuary, that is special in that there are 3 unique beaver lodges and two actual beaver dams located with guaranteed spawns.

The Giant Beaver Dam is an excellent source of several important resources. However, to get the most out of vandalizing beaver homes, keep the following in mind: