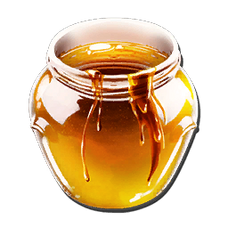 Giant Bee Honey is a resource in ARK: Survival Evolved.

Honey has a number of different usages:

Honey is highly perishable and is best kept in a

Honey can be preserved indefinitely by attaching it to a fishing rod.

It is gathered from a

Bee Hive that is produced by a tamed

Honey can also be gathered from wild bee hives, on a fifteen minute timer. Use caution, as the Giant bees could potentially come out of the harvested hive.

Honey can also be harvested with a

Dire Bear at twice the normal rate without harming the hive or aggravating the bees. This is a much better method than harvesting by hand. If accidentally attacked through methods other than Dire Bear, it can act as protection from Giant Bee knocking off.

They can also be harvested in mass quantities in The Emerald Forest in Valguero due to Hive Stacking even resulting in it becoming performance intensive from the swarm of drones. Due to this and the health drain, a Dire Bear is essential for harvesting. Destroying it afterwards is often pointless as the Stack will just respawn over time, but a

seems to be the most effective (killing the Queen Bees in the process).

Honey can also be obtained from the beehives in the Cave of the Bees on the Crystal Isles(will aggro nearby bees), and from the honey cache on Vannaland on Fjordur. Harvesting honey these ways will not spawn extra bees to attack the survivor.

A quick tutorial on how to make a bee trap to get honey easier in the Redwoods.