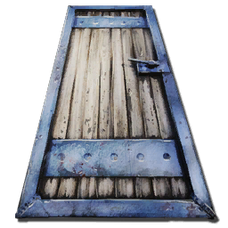 The Giant Reinforced Trapdoor is the first ceiling gate available. It offers protection to a base and is used to get tamed dinosaurs in and out of a base.

A Giant Reinforced Trapdoor can only be placed within a

Giant Hatchframe. Doing so allows the trapdoor to be locked or unlocked, allowing you to restrict access to a structure while still allowing you and your tribemates a way through. Giant Trapdoors are especially useful for exiting and entering bases with flyers.