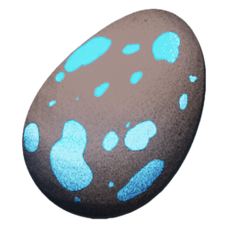 The Giganotosaurus Egg is one of the Eggs in ARK: Survival Evolved.

Giganotosaurus Eggs are randomly dropped by

Giganotosaurus. They can be eaten or used to make

Giganotosaurus mate, the resulting egg can be hatched into a baby

Giganotosaurus will cause them to become hostile and attack the survivor.

Giganotosaurus needs between 18h and 2d before having the capacity to lay eggs again. The incubation time can be reduced by up to 20% if the egg is placed in an

A Player picking up one in the presence of nearby

Giganotosaurus (Excluding domesticated Giganotosaurs), will cause them to become hostile and attack the Player, which is an extremely dangerous action. If one discovers a Giganotosaurus egg and wishes to retrieve it, an extremely fast flying mount and quick ascent are absolutely necessary. If the egg is located on a beach, an amphibious mount is also an option. Facing a Giganotosaurus (or two) on land is generally a bad idea, as their immense damage and the immediate aggression from picking up an egg requires a quick plan of escape or a well planned counterattack. If you fail to lose the aggro on the Giganotosaurus(s) and lack an extremely fast air mount, they can and will follow you back to your base, which could have disastrous results, one way to lose them is to fly over water, once they are far out, you fly back to base, they wont catch up to you then.

Carnivore Pheromone applied has laid one. They will hatch quicker than normal Giganotosaurus Eggs and the baby

Giganotosaurus will have better stats when it has hatched.