This article is about Gigantopithecus, not to be confused with 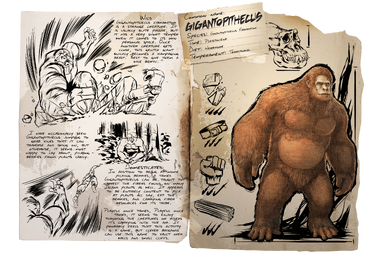 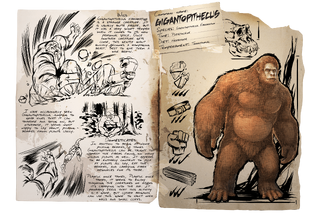 The Gigantopithecus (jy-gan-toe-pith-i-kus) is one of the Creatures in ARK: Survival Evolved.

Gigantopithecus fibrarator is a strange creature. It is usually quite passive, but it has a very short temper when it comes to its own personal space. Once another creature gets close, this gentle giant quickly becomes a rampaging beast. Best to give them a wide berth. I have occasionally seen Gigantopithecus jumping to grab vines that it can traverse and swing on, but otherwise, it seems most happy to lay about, picking berries from plants lazily.

In addition to being at home picking berries, a tamed Gigantopithecus can be taught to harvest the fibers found on many Island plants as well. It appears to be entirely content to pick at plants all day, eat the berries, and carrying fiber resources for its tribe. Playful once tamed, Gigantopithecus seems to enjoy throwing the creatures or riders it's carrying into the air. It probably feels that this activity is a game, but clever brigands can use this ‘game' to vault over walls and small cliffs.

Gigantopithecus wander around the forests of the island, eating berries off of bushes. They are naturally peaceful creatures, but will fight back if attacked or if a player or tamed creature makes physical contact with them. Gigantopithecus normally spawn as individuals and are fairly spread out, so it is rare to see groups of them in the wild. While they mainly inhabit forests, they tend to wander quite far and can sometimes be found on beaches or near rivers and mountains.

With the introduction of the Snow Cave in Patch 237, a variant of Gigantopithecus spawns inside called the Yeti. They are untamable apes that only spawn inside the snow cave at levels up to 350. These apes are vicious, terrifying creatures that will decimate any adventurers hoping to step foot inside. Stay clear from them, or use extremely powerful guns and weaponry to slaughter them before they get their powerful hands on you!

The Gigantopithecus is a close relative of the modern orangutan. However, it stands upright like a man but slightly taller, giving it a strong resemblance to Bigfoot or the yeti.

Similar to the Ichthyosaurus, Gigantopithecus is tamed by hand-feeding rather than through the use of tranquilizers. To feed one you will need to be level 30, then place an appropriate food in the far-right slot of your hotbar and get close enough to the creature for the button prompt to appear. Gigantopithecus will take one piece of the food from your inventory and will play an eating animation. You must wait for the creature's hunger to go back down before it can be fed again, a process which takes some time, depending on the level and the food (see tables).

If you come into physical contact with Gigantopithecus while you are trying to feed it, the creature will attack. You must get out of its line of sight in order for it to calm back down and be feed-able again. Your taming progress will not be reset if the creature attacks you, but you will lose taming effectiveness if you fight back.

Be careful when approaching Gigantopithecus while feeding, as it will randomly change directions or stop, causing you to run into it. It is better to approach it from behind while it's standing still, since the creature usually doesn't turn all the way around while wandering. Or you can crouch up to it and feed it that way as it will not attack you when you're crouched.

It is best to bring a flying mount in case you need to run away, since they can easily be flown above the Gigantopithecus and it will give up the chase a lot quicker than on the ground. If a flying mount is not available, fast ground mounts such as a Raptor are decent alternatives.

Another method is to trap the Gigantopithecus in a 1x1 room with no roof or a hatchframe. You can then feed it from above without having to worry about bumping into it or having it wander off, and wild carnivores will have a tougher time getting to it.

The Gigantopithecus can also be trapped directly on spot so the camera has never to be moved during the process.

When hand feeding him now, it is important to not stay on the foundation because then you have high risk of enraging it. It is advised to stay on the ground next to it and crouch, then it can be fed without any problems.

It is advised to use stone because it can easily become enraged by accident, but with enough care, wooden structures will also suffice (Thatch won't because it will be broken in the process of luring it in the box and losing aggro).

Luring into the box[]

Since dropping it in the box with a flying mount is pretty hard and only possible with a Quetzal or Argentavis, it is much easier to lure it into it. For this, leave one side of the box open at first and place a doorframe on the opposite side. Then, after getting its attention, you just run into the box, wait until it is close enough to actually enter it, and then just leave through the door frame (It cant pass through it) and close the opposite side with a spare wall.

To lose its aggro, just travel vertically till the skybox is reached and instantly return. Horizontal travel to lose its interest is discouraged because it can cause the teleporting bug, which lets it exit the box (If this happens or not is dependent on the exact placement of the box), or may even let it despawn.

Sometimes, it may be still enraged and attacking the box when returning. In this case, you need to replace all wall/door structures it is attacking.

When sitting on a Gigantopithecus and pressing the alt-fire button (default: right click), it will grab the survivor with the blue crosshair appearing in front of the HUD. It will toss him/her forward upon clicking again. This can be used to get over walls without destroying them. Be careful as this does cause the Gigantopithecus to melee attack directly in front of it, damaging anything or anyone in the established path.

If you have the Glider Suit, this can give you an excellent bit of elevation to glide around and get a good view. The Gigantopithicus can easily follow you when gliding, if you know what you're doing. As well, if you deploy the parachute, it will carry you forwards for an incredible distance, faster than most animals can run, the downside being you won't have your Gigantopithicus to defend you when you finally land.

They are an excellent mount for gaining an acrobatic advantage if you know what you're doing. Also fun fact when tamed the fiber gathering/pickup attack does torpor to enemies and wild dinos so it can be used to knock players out for an easy kill.

The Gigantopithecus is capable of carrying the following shoulder-mounts, in addition to a human rider:

Pegomastax will attack (or pickpocket, in Pegomastax's case) the opposing survivor if thrown towards them in PvP-enabled server.

Ichthyornis will do the same thing as it does for survivors when thrown towards fish.

Ferox when small. Also, when a small Ferox is carried, it will glitch and appear between the two Gigantopithecus' feet.

The Gigantopithecus can only target tribe-owned creatures, and cannot be used to pick up wild or enemy variants.

This section describes how to fight against the Gigantopithecus.

The Gigantopithecus has fairly good health and attack, since it is passive until you get too close it is easy to avoid if you don't think you can handle it.

Gigantopithecus has a good amount of knockback, this can be used to your advantage if you're using ranged weaponry and have fairly good armor or health. Keep walking backwards while attacking it with ranged attacks, and if it hits you use the knockback to give yourself more distance to keep attacking them.

Using a quetzal to pick up the gigantopithecus can be an effective way to easily kill it.

A Wild Gigantopithecus Is known to be passive, but if you bump into it as you try to feed it berries to Tame it, it will attack you so careful not to get too close when taming. If it agros you simply run away until it stops chasing, taming progress will not be lost. If you attack it, it will not stop chasing and tame is likely to be ruined. Given the added ability to tear through armor, it is best not to attempt taming with equipment that are expensive to repair.

Gigantopithecus' weakness is its strength. Gigantopithecus is known to knock you back on hit so if you survive you have a chance to run away. Once you are far enough the Gigantopithecus will ignore you and you can once again retry to tame it if so wish.

For information pertaining specifically to the real-world Gigantopithecus, see the relevant Wikipedia article.