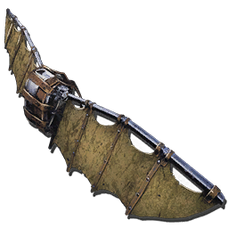 The Glider Suit Skin is an armor attachment introduced in the Aberration DLC and allows survivors to glide through the air.

While in the air, double-tapping the jump button will put the player into a glide mode, gliding forward while only losing a small amount of altitude. Holding ⇧ Shift will allow you to control your pitch up or down to dive or climb, greatly affecting your speed.

Pressing the jump button while gliding will toggle the Glider Suit off. However, it can be turned on again while falling.