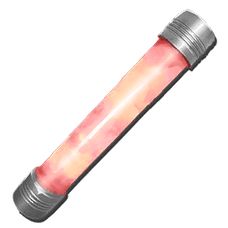 The Glow Stick is an item added in the Aberration DLC for ARK: Survival Evolved. It provides artificial illumination and can either be held, or thrown.

To use the glow stick as a portable light source, wield it and use the alt attack button (Default: Rmb) to activate it. Holding right-click attaches it to yourself. Opening your inventory, using alt attack again, or wielding another item consumes the Glow Stick and extinguishes the light source.

To use it as a placeable light source, throw it with the attack button (Default: Lmb). It will stick to the first clippable object it touches and provides light for 12 minutes. Glow Sticks can stick to almost any surface, including players, wild and tamed animals, and resources like trees and rocks. In the latter case, if the resource is harvested the Glow Stick remains in place floating in the air until its timer expires.