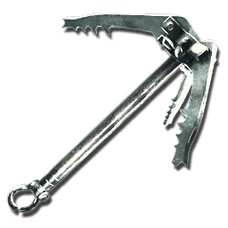 A Grappling Hook is an item used to scale cliffs, grapple other players or small creatures to you and drag them around if desired you may also use the grappling hook to attach yourself to a flying creature.

Apply the Grappling Hook as Ammo to the Crossbow to use it. Every shot will consume one hook, they cannot be retrieved.

Note, you will not be grappled to something if you logout of the game.

Reeling in the Grappling Hook will pull the player in a straight line towards their anchor point. Whenever the player stops reeling in they will begin to fall if possible though they are still limited by collisions from the side and the current length of the Grappling Hook line. Whenever the maximum length of the rope is reached the player will make an elastic bounce towards the anchor point. This means that players on grappling lines don't so much swing as they bounce forward to dangle under the anchor point. The rope does not collide with terrain or objects, so it may end up pulling the player against a rock face. The Grappling Hook will not pull the player past their anchor point, so in order to get up on ledges they must shoot past the ledge they want to stand on. Look for a rock or tree beyond the target area.

Survivors are still subject to gravity when reeling in a line attached to an anchor point below them. A survivor will fall normally until they are level with their anchor point. Then they will move horizontally without taking fall damage. This means that if you want to use a Grappling Hook to prevent fall damage, you must anchor onto a point that is higher up than where your survivor would hit the ground, but not necessarily above you. In the animation below, the player would have died if they had shot the ground instead of the rock.

Grappling Hooks will attach to:

Grappling Hooks will not attach to:

Whether or not a dino can be grappled is not based on what the dino is, it is based on their current behavior state. For example, a Dilophosaurus can be grappled and dragged when it is wandering or when it is attacking you. However, as soon as it turns to flee the line will break. Hitting a dino with a Grappling Hook does not aggro it. This is important for Quetzal taming. A Quetzal can be grappled and drag the player around as long as it is not damaged. However, the moment it is shot it will begin fleeing and break the line. That means that grappled Quetzals can be used for transportation, but not taming. Similarly, wild Pteranodons can be hijacked and ridden, though their low carry weight may slow them down significantly. An Argentavis, on the other hand, has a high carry weight and will attack the player if provoked.

Dragging with the Grappling Hook[]

Small creatures, including those that can be picked up with a Pteranodon can be dragged around by the player. This includes other players. Since the line works even after switching weapons, the owner holding the attached Grappling Hook can either run or mount onto a dino to drag the light creature/player.

Dragging behavior bounces the attach player around, which can be disorienting, giving the attacker an advantage. If the grappled player manages to hit their opponent, it will forcefully disengage the hook; freeing them.