This article is about Green Gem, not to be confused with 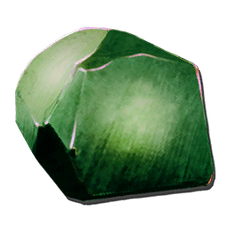 Green Gems are a resource in the Aberration DLC. They are used for crafting various items.

Roll Rat diggings. However, picking up gems left by Roll Rats will cause them to become aggressive toward you.

In Genesis: Part 2 they appear in Loot Crates and can also be gathered from obsidian asteroids.

The following creatures reduce the weight of Green Gem by the listed amount while it is in their inventory:

Green Gems are used to craft the following items: