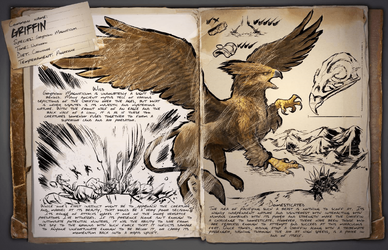 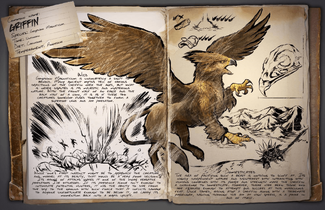 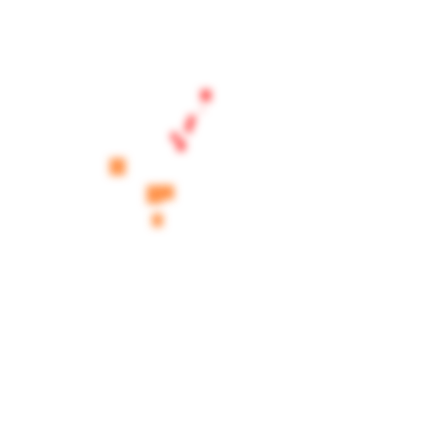 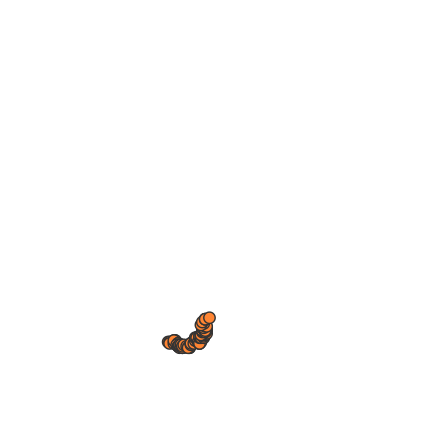 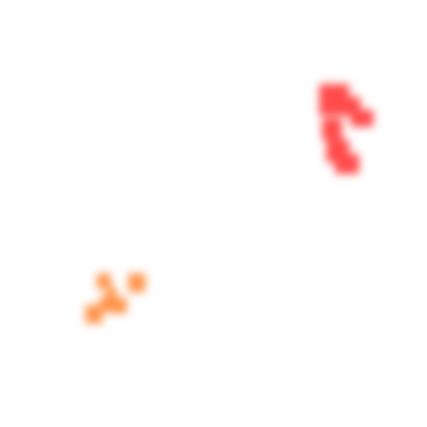 The Griffin is one of the Creatures in ARK: Survival Evolved. It is one of the new Creatures from the Expansion Map Ragnarok. It is hard to tame and is not breedable. They are mythical creatures from Greek Mythology, portrayed as lions with the wings and head of a bird of prey.

Gryphon Magnificum is undoubtedly a sight to behold. Many ancient myths tell of various depictions of the Griffin over the ages, but what is never disputed is its majestic and mysterious nature. With the front half of an eagle and the back half of a lion, it is as if these two creatures somehow fused together to form a superior land and air predator. While one's first instinct might be to approach the creature and marvel at its beauty, that would be a very poor decision. Its range of attacks makes it one of the more versatile predators I've witnessed. If its presence alone isn't enough to intimidate potential hunters, it has the ability to dive from the sky to the ground with such force that it inflicts damage to anyone unfortunate enough to be below it, or carry its momentum back into a rapid uplift.

The idea of pacifying such a beast is nothing to scoff at. Its highly independent nature and disinterest with interacting with humans combined with its power and strength make the Griffin a challenge to domesticate. However, there have been those who are fearless enough to attempt and succeed at this miraculous feat. Once tamed, riding atop a Griffin along with a tribemate passenger, dashing through the air at high speed, is a prize in and of itself.

Aggressive and easily distracted so bringing multiple flyers would make obtaining one difficult.

It is a chimera with a lion's body, tail and two hind legs, and with the wings, head, and talons on the two front legs of an Eagle. They are predominantly various shades of brown, but can sometimes be found red out in the wild. The face and belly can also be white.

This section displays the Griffin's natural colors and regions. For demonstration, the regions below are colored red over an albino Griffin. The colored squares shown underneath each region's description are the colors that the Griffin will randomly spawn with to provide an overall range of its natural color scheme. Hover your cursor over a color to display its name and ID.

This section describes how to fight against a wild Griffin.

Griffins are often seen alone or in a pair, most commonly among trees or at the top of cliffs. They have a rather wide aggression radius, and will chase a survivor for long distances before disengaging. Special care should be taken to be aware of your surroundings, as even the small amount of knock back dealt by their attacks might push a survivor to a death at the base of a ravine.

The Griffin is a surprisingly resilient opponent, and does not appear to take the bonus damage from ranged weapons that other flying creatures do. Fortunately, their attacks also appear to be somewhat weak in comparison to other flying creatures of the same level, and easily avoided owing to their large turning radius. Griffins might occasionally attack a survivor from the ground. They seem to be easily distracted, and are prone to switching targets.

A good strategy would be to deal the first hit with a long-range weapon such as a gun, or bow and arrow. From there, the griffin will chase you. For this part of the strategy, you'll either need a lot of stamina and movement speed, or a fast mount with rider weaponry. By getting the griffin to chase you, it will follow you in a straight line, instead of circling you, allowing for a clear shot to the head. Once you're far enough away to stay clear of its attacks, but close enough to land a few hits on it with your ranged weapon, shoot it in the head. Alternate running away from it and attacking it until it begins to flee. Once it starts to run, chase it and continue to shoot it. Make sure there are no other griffins nearby, as they will aggro and attack you if you're not careful. Keep firing at it until it either goes unconscious or dies.

Ranged weapons and pikes seem to be particularly effective, owing to their propensity to circle the player at short range. Be mindful of other hostiles in the area, as the areas they spawn are home to many Carnotaurus and Terror Birds. Mounts with a wide area of effect attack and decent damage such as the Rex will make short work of these creatures.

This creature does decent damage (a wild level 150 deals around 120) and will kill you if not careful.

The griffin also has a powerful dive-bomb attack.

Its turning radius is atrocious, so one can stand and it'll simply fly around you.

Though difficult to tame, it may be worth attempting to tame a Griffin as high a level as possible since they are not breedable and you therefore cannot breed for better stat mutations. Knock the Griffin out, make sure to make a pen that it cannot get out of, as its torpor raises closer to max it'll fly away and it'll be impossible to knock it out. They don't take up a lot of narcotics. When caught in a pen the Griffin can enter a "panic state" behavior, camera shake will be massive, can be turned off in options.

Grab one Pteranodon, at least 5 stone dinosaur gateways, and 2 gates. Set them down in a row leaving a space to walk out and put a gate on each end, keep one end closed, then you aggro the griffin and bring it back to the trap. When you are near speed up and get off the Pteranodon. Aggro the griffin on foot leading it into the pen and walk out of the side, then go around and close the open door. It is now trapped. The griffin can now be tranquilized at leisure and will be protected from other wild dinosaurs, although beware of attacks through the walls.

Another way to tame a griffin is to make a small pen made out of stone, grab a Pteranodon with high stamina and a tamed dodo. Griffins like to aggro on anything that isn't you, so with a Pteranodon holding a dodo you can lure it in a pen.

A simple, early game method for taming a griffin is use its huge turning circle against it and let it fly around you while hitting it with tranq darts. It does have a relatively high base torpor, so make sure you bring plenty of tranq arrows. You may need to do some circle strafing to keep out of its way, but it is possible to do it without being hit a single time. Eventually it will flee once its torpor is high enough - chase it down with a fast mount (Such as a Sabertooth) and get the last few tranq darts in while it flies away, being careful not to aggro anything in the process.

Keep in mind its torpor drains extremely quickly, while its food drains relatively slowly, so prepare plenty of narcotics beforehand.

Make sure to monitor the Griffin's health, as it may die if you use tranq arrows, so it's highly recommended to use tranq darts or shocking tranq darts with a longneck rifle.

Another way is to use a Griffin to take out a Griffin while shooting Tranq darts from its back.

A Griffin is capable of carrying smaller creatures and Human players.

Currently on official, and most unofficial, PVE servers, wild animals may not be picked up to prevent griefing.

The Griffin is capable of carrying the following creatures:

Though not stated in the above table, the

Ferox in its small form can also be picked by the Griffin.

For information pertaining specifically to the real-world Griffin, see the relevant Wikipedia article.