Halls of the Reaper Queen (Aberration)

Edit
Halls of the Reaper Queen 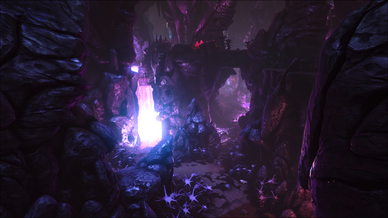 Halls of the reaper queen is a narrow area characterized by cliffs and elemental crystals dotting the walls with a few element rivers running through. There is also a surface entrance at the far west of this region. It is characterized by giant rock like steps.

The area is radioactive and requires a full hazard suit or lamprey, The former is usually the better choice due to it lasting longer.

This area is also one of the few natural spawn points for reaper queens, but it is accompanied by plenty of dangerous wildlife. So be prepared to fight. A charge light is recommended but don't use it too much.

The area is bordered by The Lost Roads to the north and Halls of the Reaper to the south.