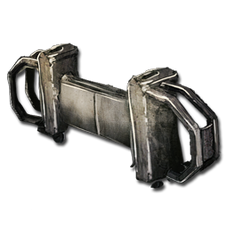 Handcuffs are an item used to restrain other players.

Put them in an unconscious player's 'hands' slot to apply.

Additionally, if a cuffed player is near enough to a bench they can be locked to said bench and are unable to do any actions other than look around. This can be done to offline and online players which makes the transport of prisoners via raft possible.

While cuffed the player cannot

The player can still