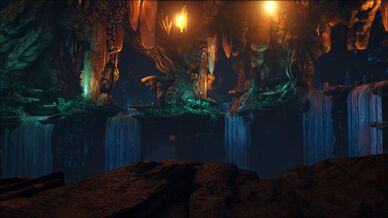 The cave entrance is a vertical, underwater shaft, located in the lake at (55.2, 65.9). The shaft is just large enough for a Rock Drake to fit through and there is space to park 3-4 drakes once through the tunnel. You won't be able to take the drake far into the cave system, but it's a convenient way to get there.

There are a number of vertical cliff climbs in this cave that you will need to traverse to get to the artifact, which can be overcome with

to get back out)

There are also several longer underwater tunnels, full of aggressive creatures. It is suggested to take multiple

Harpoon Launcher and plenty of

Crossbow) that can be fired underwater, is recommended over melee weapons due to the presence of

Bring a campfire with some wood when traveling through the cave; it is extremely likely you will be lamprey'd in the underwater tunnel, making you a target for the swarm of seekers that surround the artifact. Keep your wits about you in case of an earthquake; if climbing out of the water, time your movements so you don't fall back into the water.

There are two routes to reach it, and by far the easiest, most straightforward one is going through the underwater passage located at the bottom side room from the main chamber. The journey includes one time of surfacing, then dive forward again to reach the artifact chamber.