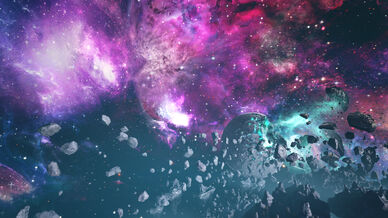 The High Orbit, otherwise known as the Lunar Biome is a region in the Genesis: Part 1 DLC.

Full of large asteroids, the lunar biome is the best place to find Tek creatures in genesis. With lethal meteor strikes, burning radiation in the sun (though not as bad as on Abberation) and dangerous creatures, this biome can be lethal to early on players.

Low gravity and boosts from geysers facilitate getting around, and valuable resources along with tek creatures can be found here.

You will not suffocate here, the air in space is breathable.

The radiation here will slowly kill you by heating you up, but can be survived for quite a while even without protection unlike on Abberation.

The smaller gas vents can help transport you around, the larger green ones will hurt and/or kill you.

You cannot harvest the defence units in this biome. However, there are a lot of tek creatures here to harvest instead.

Having Rock Drakes make this map much easier to navigate - they are able to take on most creatures here or get away easily, and their climbing and gliding makes make a missed jump between asteroids far less daunting as they can recover from even terrible jumps. As they glide at normal speed despite the low gravity they can swiftly return to the surface if desired without needing to slowly float down.