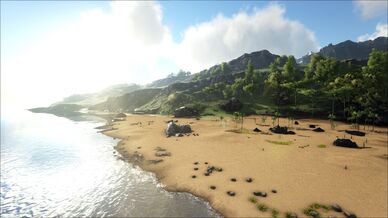 Highland Sands is a region in Ragnarok.

This Beach is located in the north-west of the Highlands and turns into the Volcano Beach to the west.

This wide stretch of beach is inviting to newcomers, plenty of resources for a beginning base and is relatively out of the way, but holds plenty of dangers as well which may not make it ideal. The unique threat of creatures usually confined in caves spilling out from the volcanic beach is high, particularly megalania. Not to mention the volcano itself. In addition, while the highlands are relatively safe to travel across, they are home to (granted very rare) Gigantosaurus and Allosaurus, as well as Titanosaurs, all of which can be devastating to those who can’t avoid them, and do wander onto the beach on rare occasions. Even if the beach can be kept relatively safe, the highlands are still an island among some of the most dangerous areas the map has to offer. For an advanced tribe however, this can pose an opportunity. Plenty of building space, access to the sea and deep trenches, the volcano and its wyvern trench, the highlands, even the murdersnow and redwoods are not too far off.