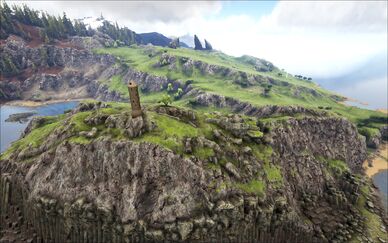 Highlands is a hilly plains to the east that on the edge ends in rock cliffs.

The Abandoned Lighthouse is found in the northeast corner of this biome. Nataziel Spires Cave and Nessie's Cave are also present in this area, along with many other ruins and points of interest.

Rockarrot and their seeds can be easily found and harvested here. There is a farm of both of these at 20.1 / 82.8.

Be careful when building in the Highlands because they are speckled with Allosaurus and Giganotosaurus. The danger from these creatures is less than they would be elsewhere since they are rare and can be seen and planned for long before they’re a direct threat, but they are still among the gravest threats any survivor can encounter. On the western edge of the plains, one can commonly find other threats such as araneo, arthropleura, titanoboa, mantis and even the occasional wyvern spill into the highlands to escape volcanic eruptions in surprisingly large numbers.

Though they are threats, the Allosaurus and Giganotosaurus can be easily spotted on open terrain before they come to players. Mutton from local Ovis is an exceptional food for those creatures in later game.