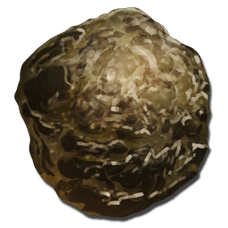 Human Feces are the excrements of humans in ARK: Survival Evolved. From time to time, they automatically drop from any survivor. Additionally, the player can press + or

to manually drop feces. The

Food-icon becomes grey/pale when the target is in a hidden status of "constipated" and it is ready to poop. While constipated, the player will consume food at a greater rate than normal. Upon pooping, the bar will return to its normal teal color. Sometimes you will need to poop repeatedly when replenishing stamina or health. If eaten, human feces drop the survivor's health by 30 points.

Human Feces can be used as fertilizer and add 1000 points to fertilization when they are put in the inventory of a Crop Plot.

Fertilizer, or used to tame Dung Beetles. A Dung Beetle can also convert it to Oil and Fertilizer.