This article is about Industrial Cooker, not to be confused with 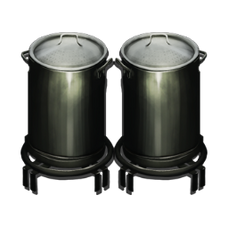 The Industrial Cooker is an advanced version of the

Cooking Pot. It can be used to create food items, dyes and also custom recipes.

The Industrial Cooker must be snapped to an irrigation pipe (intersection recommended).

The Industrial Cooker can be lit by placing

Gasoline into its inventory and activated by pressing the 'Use' button (E,

). Holding the 'Use' button will open the radial menu, where the player can choose to open its' inventory, light it, or destroy it.

The cooker is used to craft

Soap and all different colors of

After putting the necessary ingredients into the cooker, including

Canteen that is at least 25% full, light the fire using the button below its inventory slots to cook the food.