This article is about Industrial Grill, not to be confused with 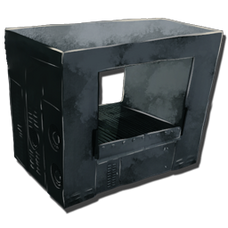 The Industrial Grill is a structure in ARK: Survival Evolved used to cook meat. It also heats the player, and lights up a small area when lit.

The Industrial Grill can be lit when

Gasoline will keep the grill burning for 40 minutes. During this time it can be used to create roughly 1600 pieces of each

The tradeoff for being able to cook meat very quickly compared to the campfire is that gasoline is much harder to come by compared to thatch, wood and sparkpowder. It is, therefore, not efficient to use the grill unless you have large quantities of meat (1600 raw meat is 40 stacks of 40). This can be achieved over time with a refrigerator or preserving bin, or just from a hunt with a dino like a Rex or a Therizinosaur. The industrial grill is indispensable for cooking the large quantities of prime meat obtained from an Alpha Creature before it spoils.

Items that are crafted in the Industrial Grill:

The Industrial Grill's name is well-deserved. The amount of meat produced by the grill exceeds even a large number of

Campfires due to its faster cooking time and its ability to produce several units at once; not to mention the easier handling. The following table gives an overview of estimated cooking time based on an original measurement of 12 ×

Cooked Meat in 18 seconds: Measurement for 980 meat was performed manually, but individual results may vary due to small amounts of server lag occurring several times over long periods of time.

Note that when cooking 980 meat, the last stacks to be cooked will lose 2 ×

Raw Meat to spoilage, as Raw Meat spoils once every 10 minutes. If the player decides to really make use of the extremely long burning time, the grill is able to provide about 2570 ×

Cooked Meat per hour which is 52 stacks of cooked meat (more than a half of refrigerator's 80 slots).

The Industrial Grill is not currently paint-able, however this object may be re-mapped to include paint regions in a future update.