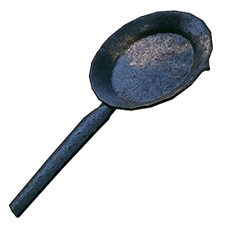 The Iron Skillet is an ARKetype in ARK: Survival Evolved Mobile.

The Iron Skillet acts in a similar manner to the

Wooden Club. The difference is that it will automatically knock out small creatures.

The Iron Skillet can be purchased as an Engram for $9.99 from the In-Game Store and cannot be repaired.