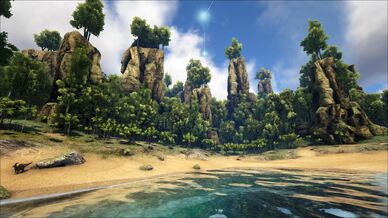 Jungle North Beach is a region in The Center DLC.

Overlaps and appears to have replaced the original Jungle North island. Terrain is similar, though with different creatures populating it.

Surrounded by thin beaches walled by cliffs, access to the island’s center is limited to a select few places. The beaches themselves are home to numerous small predators. The northern shoreline is relatively safe, even for new players as a spawn, aside from Ichthyornis, which gather in large numbers there.

The northern shoreline is relatively safe and mostly protected from large predators by alcoves in the cliffs. Beds are highly recommended before attempting any construction anywhere on this island however. Because the spawning location covers the entire perimeter beach, a bad respawn could place you unprepared into a hostile environment on the opposite side of the island of where you intended to be.