Lair of The Mask (Ragnarok)

Edit
Lair of The Mask 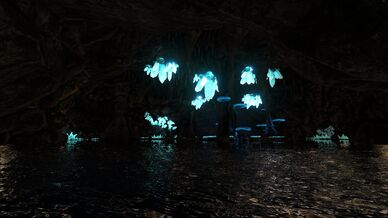 Lair of The Mask (more commonly referred to as Mushroom Cave) is a cave in Ragnarok.

Hidden out in the depths of the sea near the Blue Obelisk lies this expansive and isolated cave, which holds its own generous supply of

Metal and even various areas to gather

The cave itself is quite large, despite only being one visible area and having one entrance and exit, granting survivors a wide area to build and expand in. Not only that, but it is surrounded on all sides by water, making entrance to the main area difficult if it happens to be well-protected.

This cave has no Creature Spawns, but

Mosasaurus can spawn around the entrance.