This article is about Lamppost, not to be confused with 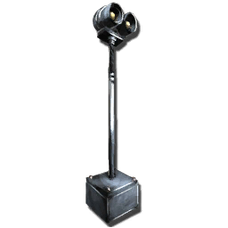 The Lamppost is a source of light that can feed off an existing electrical power grid. It is similar to an upgraded version of the

Standing Torch, but doesn't emit light in all directions. Nor does it emit heat.

While the in-game icon (and current name) of this item suggests a lamppost, it behaves more like a spotlight. Instead of projecting light around it, the Lamppost projects a cone of directional light at a slightly downward angle. The

Omnidirectional Lamppost, however, can emit light in all directions.

The Lamppost does not require a foundation for placement, and as such does not interfere with the spawning of natural resources. It does not snap to other structures.

The Lamppost is not currently paint-able, however this object may be re-mapped to include paint regions in a future update.