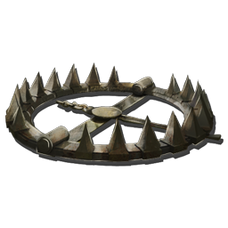 This article is about Large Bear Trap, not to be confused with

The Large Bear Trap is an item used to immobilize larger creatures in Ark Survival Evolved. Once placed, the trap can be picked back up by the tribe that owns it, so long as the tribe member is approved for demolition, however the trap may not be picked up if it has been sprung, only be demolished. When used against a larger tribe that favors strong assault Dinos such as the Rex and Giganotosaurus this item can be quite effective.

The trap activates when a medium or large dinosaur steps across it. It can be placed anywhere on the map, with the exception of other players foundations. The trap can be placed under a neutral dinosaur without angering it, but will not activate until the Dino moves. Once activated, the rider is forced to dismount, and cannot remount until the Dino is freed. The trap is considered a metal structure, and cannot be harmed by anything but explosives, arthropleura or bosses The use of said explosives will also harm the dinosaur, however, there is a bug allowing dinosaurs that are attacking before the trap activates to destroy said trap. Make sure you are well in front of your target so it does not hit the trap while swinging at you. Wild animals are able to break free of the traps quite easily. Tamed creatures, however, will have to wait for the decay of a 100-point timer, lasting roughly 800 seconds.

This trap is very useful when taming Gallimimus and Procoptodon. They will be stuck roughly 10 to 15 seconds allowing you to get a few tranq darts into them!

The Large Bear Trap is not currently paint-able, however this object may be re-mapped to include paint regions in a future update.