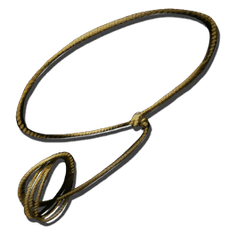 The Lasso is a ranged weapon in ARK: Survival Evolved.

It can only be crafted in an Equus with the Equus Saddle equipped and it can only be used while riding an Equus.

The Lasso can be used to drag around both unconscious and conscious creatures.

Although it inflicts 1.4 times as much torpor as damage (i.e. 14 torpor base), it is not an effective means of knocking out a creature, nor of keeping one unconscious for a long journey.

The lasso can also be used to gather certain resources and to collect dropped items and loot bags from a distance by pulling them towards the rider; it does not collect such items automatically.

The lasso can drag creatures from the following list.

(More to be added)