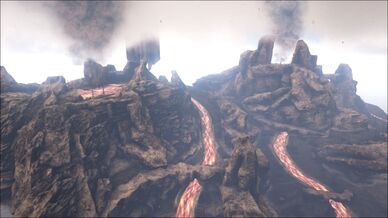 The Lava Biome is a volcanic island to the north in the DLC: The Center.

Molten lava is abundant here in this biome of scorched earth and dangerous predators. Small, smoldering fires can be found burning small bushes. Survivors will need to bring lots of Water and Ghillie Armor to survive in the extreme heat. There is minimal vegetation, but the trees can be harvested directly for Charcoal. Ash falls from the sky, and basic resources are scarce, however this region is plentiful in Obsidian, Metal, and Crystal. Oil and Pearls can be found in its Piranha-infested calderas.

Two caves can be found here: the Lava Oasis Cave and the LavaCave.

Trees and rocks are present on this island, as well as Charcoal from the trees.

Two active volcanoes sit on the highest peaks of the island.

Lava rivers flow through the island.

The island is very rocky.