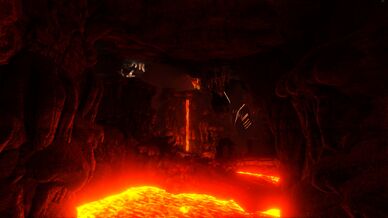 The Lava Cave (also known as the South East Cave) is a cave on the southeast coast of The Island map. The cave contains the

Artifact of the Massive, needed to summon the

Broodmother. There are dangerous lava pits inside and it's very hot.

Creatures that do not have the ability to jump will not be able to get to many areas of the cave.