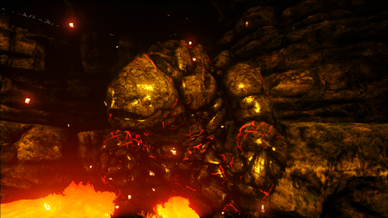 The Lava Elemental Arena is an arena in the end of the Jungle Dungeon, for fighting the

The entrance is found in the artifact room of the

Artifact of the Hunter in the Jungle Dungeon, behind some crystals. Once removing the crystals, a small crouching path is revealed.

After reaching the exit of the path, the path will open up into a circular room with lava in the center.

You will see a message and timer appear which gives you some time to leave the arena, in case you no longer want to fight the

Once the timer ends, the

Lava Elemental will spawn and a barrier will appear that doesnt let you out till you win or die.