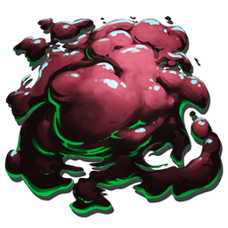 Leech Blood is a naturally obtained resource. It can be harvested by killing

Leech Blood is an ingredient of

The easiest way to collect Leech Blood is to build a Wooden Raft with a room and an open deck, and sail to the swamps.

Another option is to ride a Rex into the swamps and kill all the leeches. Once finished, harvest them using the Rex or a Hatchet. Using a Dino will prevent leeches from becoming attached to the player. This method will work with any carnivore but to be safe from Kaprosuchus' grab ability make sure your Dino is immune to it, usually by being too big to carry. A Rex or Spino is recommended for this reason.

On Aberration, Leech Blood can be collected from lampreys found in the blue zone.

It is also used as a bait when

Fishing, as an alternative to using