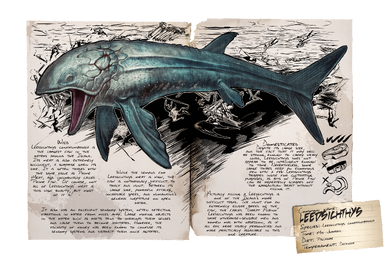 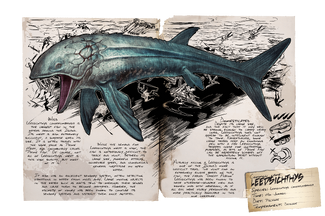 None
Drag Weight
1300
Can Damage

The Leedsichthys (Leed-sick-thees) is an aquatic Creature in ARK: Survival Evolved.

Leedsichthys conviviumbrosia is probably the largest fish in the waters around the island. Its meat is also extremely succulent, a surprise given its size. It is often traded with the same value as Prime Meat, and colloquially called 'Prime Fish'. Of course, not all of Leedsichthys' meat is this high quality, but most of it is! While the demand for Leedsichthys meat is high, the fish is notoriously difficult to track and hunt. Between its large size, powerful attacks, incredible speed (when it turns to flee), and humankind's general ineptitude on open water, actually killing a Leedsichthys is one of the Island's more difficult tasks. The hunt for an extremely elusive breed of the fish, the fabled 'Great Albino' Leedsichthys has been known to drive otherwise-sensible men and women mad with obsession, as if all evil were visibly personified and made practically assailable in this one creature.

Despite its large size, and the fact that it may well be strong enough to carry heavy loads, Leedsichthys does not appear to be intelligent enough to tame. Nevertheless, some large tribes keep an enormous pen with a few Leedsichthys trapped inside for cultivating purposes, as bits of Prime Fish can be repeatedly scraped off the gargantuan beast without killing it!

The Leedsichthys is passive toward most things with the exception of rafts. They will stop at nothing to take down any raft in open water. Their sheer mass gives them the power to wreak havoc on even the best protected raft. When a raft is encountered the Leedsichthys will charge at full speed smashing the raft to bits by dealing direct damage to the raft itself even when the raft is fully encased in stone or even metal. Boaters beware; the Leedsichthys are anywhere there is deep water, and aggressively attack your watercraft (but not on mobile).

The Leedsichthys is a spectacular sight for any deep-diving survivor. Nothing less than an enormous fish, the beast's cavernous maw is capable of swallowing humans whole (thankfully, the creature only feeds on minuscule fish and plankton as well as boats apparently). Its head bears light armoring to protect itself from Mosasaurus and a powerful tail, capable of turning rafts into splinters, propels it through the open ocean. The beast is so vast that bits of its flesh can be scraped off its body without seriously injuring it - a tactic that survivors use along with small water predators.

This section displays the Leedsichthys's natural colors and regions. For demonstration, the regions below are colored red over an albino Leedsichthys. The colored squares shown underneath each region's description are the colors that the Leedsichthys will randomly spawn with to provide an overall range of its natural color scheme. Hover your cursor over a color to display its name and ID.

This section describes how to fight against the Leedsichthys.

A normally passive creature to players and other sea creatures that you can harvest Raw Fish Meat and Raw Prime Fish Meat off without damaging it.

Use a high melee damage

Megalodon mount to attack its sides, you can easily out maneuver it and avoid its melee attack and get around the heavily armored front.

Another strategy would be to lure it onto the beach or shallow water, potentially trapping it and leaving it exposed to attack. Though that is a good strategy, try trapping it in areas it can not move much in, making it hard for it to escape.

Another strategy would be to bring some suicidal small aquatic dinos as the Leedsichthys is only able to hit one at a time. This means that you can hit it while it is busy killing the smaller dinos in the battle.

Melee is not recommended. Crossbow or Harpoon Launcher, ranged weapons that can be fired underwater are preferred. If lured at beach, then any ranged weaponry can be used.

Powerful jaws that have the ability to kill most survivors in one hit. Leedsichthys are very aggressive towards rafts and their occupants, and can destroy even metal ones with a single hit. (Swimmers -mounted or not- are normally not attacked). This is not the case on mobile.

Megalodon are commonly seen surrounding it. They also have an armoured front similar to that of a

When on a raft, in spite of their enormous size they are all but invisible and undetectable. The only warning you may get before an attack are the occasional grunt/groaning they make and the noise of it accelerating through the water, which can give you precious seconds to react. If you can hear one, you are within its agro range. It is also possible you may miss the noises, or that there were none at all, so when sailing in any water deep enough for one of these beasts to submerge, expect an attack at any time that can come without warning. Do not attempt to fight to save your boat, as staying near one guarantees its destruction. Simply head towards the closest shore and pray you can make it!

Very Slow with a Large turn Radius and no armor on its sides.

Giant Bee Honey off the raft will temporarily calm the Leedsichthys. Its advised to have more than one survivor; one to maneuver the raft while the other toss honey thus increasing the odds of escape.

For information pertaining specifically to the real-world Leedsichthys, see the relevant Wikipedia article.