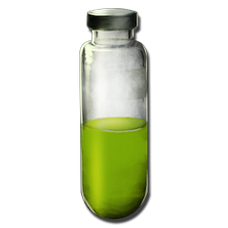 Lesser Antidote is a consumable in ARK: Survival Evolved. It is mainly used to cure

Swamp Fever, transmitted from a

Diseased Leech among other sources, but can also be used to cure other minor ailments.

Upon consuming the Lesser Antidote, the player will have the debuffs from

Dilophosaur's venom removed, as well as curing Mega Rabies caused by Megalania and Onyc. While the effect is active, the player is immune from being mind controlled by a Noglin. The player will gain immunity from re-acquiring these effects for three minutes.

With the increase of spoil timer in 312.65, it is advisable to farm up and maintain a stockpile of antidotes, similar to stockpiling Medical Brews. This is because they offer temporary removal of swamp fever, increasing weight and hp, and more critically, immunity to being mind controlled by a Noglin for three minutes. On PvP servers with tribe slot timer where caging is allowed, players being noglined and then caged can be extremely damaging. Since lesser antidotes offer a hard counter to noglins, it is advisable to always carry a few and keep the effect on constantly while pvping in caves or restricted spaces.

The easiest way to collect

Leech Blood is to build a

Wooden Raft with a room and an open deck, and sail to the swamps.

Another option is to ride a Rex into the swamps and kill all the leeches. Once finished, harvest them using the Rex or a Hatchet. Using a Dino will prevent leeches from becoming attached to the player. This method will work with any carnivore but to be safe from Kaprosuchus' grab ability make sure your Dino is immune to it, usually by being too big to carry. A Rex or Spino is for this reason recommended.

Leech blood can also be harvested in a large amount by going into the Swamp Cave and killing the leeches in the ponds before they latch onto you or your mount.

Deathworm Horns can be used. Obtain them by killing these creatures and loot their inventory.

The easiest way to obtain

Rare Flower is from inside

beaver dams. When opening a beaver dam, any nearby beavers will immediately gain aggro and attack you. If you have access to Ragnarok, they grow wild all over the map (blue flowers on the ground) and in Valguero, usually near a beehive.

There are a couple ways to deal with this threat.

Players on The Island can also obtain plenty of Rare Flowers while gathering berries along the shores of the swamp. A Therizinosaur or a Brontosaurus are the best choices for gathering large quantities quickly. Bring these animals to the swamp and keep hacking away at the bushes, you will end up with plenty of flowers quickly.

If players have tamed/raised a

Megachelon from Genesis Simulation from DLC map, they can gather Rare Flowers from its inventory over time.

Rare Mushroom can be obtained from inside

Rare Flower. They are also obtained by chopping down the trees in the swamp that have visible roots above ground. A Theri, Bronto or Mammoth would do the job, but Theriz are encumbered easily and the Bronto also gathers other unwanted items. Mammoths don't encumber quickly since their weight reduction for wood. Players can also use an Ankylosaurus when mining

If players have tamed/raised a

Megachelon from the Genesis Simulation DLC map, they can gather Rare Mushrooms from its inventory over time.

Narcotics can be made in a

Mortar and Pestle by combining 5 ×