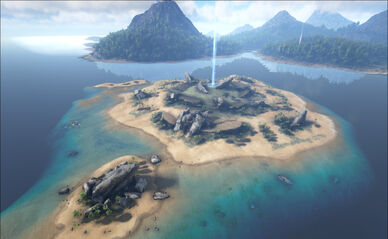 Levelling is the process of gaining experience levels for you and your tamed Creatures. Levelling up gives either you or your creature better statistics and unlocks Engrams.

As of June 2022, the maximum player level is 190. (Survivors start at level 1. 104 levels can be gained normally, 60 gained by defeating end-game bosses, 10 gained from collecting all Explorer Notes on every map, and 5 acquired by levelling up a Chibi, a cosmetic event pet. 10 more levels can be obtained by collecting all runes on Fjordur.) Once you have reached this limit, you will not be able to level up anymore.

On Ark Mobile, the maximum player level is 100, without the need to defeat Bosses.

On official servers, Creatures have a hard-capped limit at level 450. Tameable creatures introduced in the Genesis DLCs,

Dinopithecus are the only exception, with 500 being their hard-cap. Creatures at their respective hard-caps and above will spontaneously disappear when the server resets (if not in a cryopod). Cryopodded creatures beyond their hard-cap may fail to de-pod.

For further tips or advice see: Tips And Tricks#Levelling Up

Spear engram is unlocked then do the same. If you do a Note run, craft Cooking Pots as soon as you finish. Cooking Pots give a large amount of XP for their cost. Craft them until your XP boost runs out.

Foundation needed for a

Late-game, the crafting method of levelling can become very tedious to players who don't prefer to build, so it is recommended to move onto the killing or hunting method.

: In Mobile when playing in Casual Mode, all resources are returned when demolishing buildings. Building and demolishing repeatedly can be used to get plenty of experience in short time (turrets get xp faster)

The Dead Island can be just as dangerous as the Alpha Creatures. Carno, Raptor, Pulmonoscorpius, Sabertooth and Argentavis spawn in bulk. The occasional Rex also can be seen fighting large amounts of predators. Rarely, but possible, you will see Alphas here. It is suggested you go level up a little on the main island before traveling over here. Travelling to The Dead Island can be a challenge. You will most likely need a Wooden Raft. Craft one of those, place your dinosaur on the raft, and drive over. You can do this, or, for the medium-small creatures, you can use either an Argentavis or Quetzal to fly them over. Be wary as you're levelling, your bird may get attacked, use this plan at your own risk. However, if you use a Raft, be aware that there is a chance that your Raft can be attacked - and highly probable that it will be destroyed - by a

The Swamp Cave is a relatively easy cave with the right gear. Refer to the Swamp Cave page for gear requirements, however, the true bare minimum for the cave is just the clothing and basic foodstuffs. A Megatherium of level 100 or greater without any post-tame levelling will make quick work of the cave, however, you will need a Cryopod to get it through a few tight areas. Before you start the cave, it is recommended to get both a 4x and 2x explorer note for maximum XP gain, get the 4x note last and immediately rush to the cave to maximize XP. 1 swamp cave run will give ~70,000 XP. With both notes, that increases to ~560,000 XP.

If you are making a new character and plan on running swamp cave to get to lvl 100 quickly, it is a very good idea to do the extinction note run referenced above instead of the island note run in order to save the notes on the island for the cave.

Killing Titanosaurs using a Thylacoleo is a strategy that requires less preparation than the swamp cave but is arguably more risky. It is recommended to do the Extinction note run first for new characters to Save the notes on the island for the strategy. Titanosaur give 80,000 - 112,000 XP when killed but have extremely high health, however, they are still susceptible to bleed effects. The Thylacoleo does a flat 5% health damage over 5 seconds with their bite (Gnashed Status effect). This can be used to dish out 11,500 damage per bite against . The Titanosaur has 230,000 HP regardless of level, which means that ~19 bites will put it at about 6,000 - 10,000 hp. Bite the tail of the Titanosaur to avoid its attacks, the Titanosaur has a short aggro, making it easy to run away, loose aggro, and bite the Titanosaur again. The goal is to get the titan below 12,000 HP. Use the Magnifying glass to check HP often to avoid accidentally killing the Titanosaur with bleed, which will not give XP. Once the Titan is below 12,000 HP wait a few minutes for it regenerate to 12,000. After it Regenerates, get 4x and 2x XP Explorer Notes to maximize XP gain. Bite the Titanosaur a final time to put it at extremely low health and then finish it off with a crossbow. This should grant upwards of 640,000 - 896,000 XP.

This method of levelling is one that sounds gruesome but is highly effective at earning a large amount of XP with little effort and no risk. Baby creatures when killed give an equal amount of XP as if you were to kill it fully grown. Giganotosaurus when killed gives large amounts of XP so a high level breeding group can supply you with eggs for easy levelling in addition with the other listed methods above. Other types of creature babies such as Rexes and Spinos can also be used for this method as well. The addition of the egg incubator with Genesis:Part 2 will be a great asset to use when hatching eggs. The incubator can keep eggs ready to hatch for whenever they are needed just remember that once the eggs are ready to hatch they cannot be removed from the incubator.

Amount of received Experience can be increased with certain temporary bonuses:

You can level your survivor up to level 105 by default. Clearing the Tek Cave on The Island, defeating Rockwell at Aberration, beating Master Controller at Genesis, beating Rockwell Prime on Genesis Part 2, and levelling 1 Chibi-Pets gained from events will further increase the maximum level of the Survivor, as per stated below Character Levels. Each level gives you a skill point to both increase the attributes and a certain amount of Engram Points.

Chibi-Pets grants 1 extra level per every level it gains, up to a maximum of 5 extra levels. Collecting all Explorer Notes will grant you an additional 10 levels. Collecting 200 Runestones on Fjordur will grant you an additional 10 levels. Gamma variant of last bosses gives extra 5 level, Beta extra 10 and Alpha extra 15 (Non-cumulative on identical bosses). As of current, the maximum level obtainable is level 190 with all the above cleared at Alpha and Max level Chibi-Pets. Without any of it, the maximum level obtainable is 105. In this table, "XP" is "Experience points" and "EP" is "Engram points".

You can level up a tamed creature 73 times (88 for ARK: Genesis-exclusive creatures and X-creatures) past the original level it was tamed at (after Taming Effectiveness is applied), these are known as domestic levels. Each level, you gain a skill point to increase one of the attributes of your tamed creature. These levels are not displayed separately in-game, but are instead combined into one overall creature level.

From 60 levels the difficulty to continue levelling up is much higher.

In v329.5 Ascension was expanded with the release of the Genesis: Part 2 DLC, adding an additional 15 levels (i.e. up to 180). Tames may be also given up to 88 levels regardless of the DLC they come from, or the game mode.